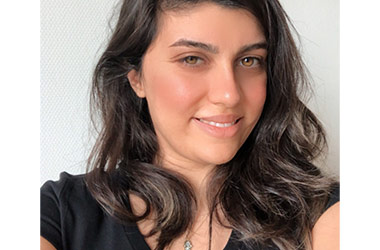 Talk about top female talent! Not only is Wittenborg student Giti Irantaj about to complete her second master's degree, but she has already landed a cool job in Amsterdam with one of the world's most recognisable brands, Yamaha Motor - the Japanese company best known for manufacturing motorcycles. We caught up with her before she starts on her exciting new journey.

Hi Giti, can you tell us more about yourself?

I am Iranian and doing my second master's, majoring in Digital Marketing and Communication. In general, I’m an active person and I like activities that give me an adrenaline rush. I don’t like routine activities. I am interested in travelling to different countries, playing tennis and driving. Multitasking makes me happy and when I reach my goals I appreciate myself and try to enhance my effort for the next steps. 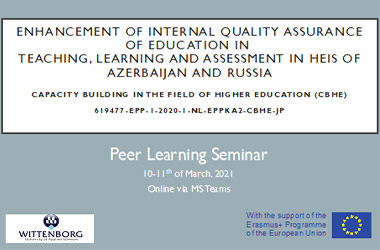 The 2-day seminar, entitled “Enhancement of internal quality assurance of education in teaching, learning and assessment in HEIs of Azerbaijan and Russia” was attended by researchers, quality assurance experts and management representatives from all 10 project partner institutes from Russia, Azerbaijan, Spain, Germany, and the Netherlands. The special guest was Diane Freiberger, Managing Director of Foundation for International Business Administration Accreditation (FIBBA) - a European accreditation agency that works internationally and is an associate partner of project IQAinAR.

Equal but Different: Students Can Now Pursue Doctorates at Universities of Applied Sciences 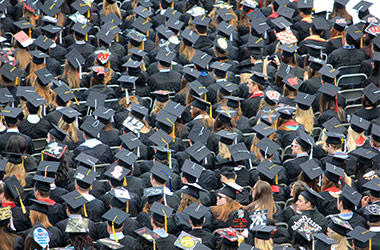 From next year, students at university of applied sciences (UAS) will be able to pursue a Professional Doctorate (PD) after completing their master's. Up until now, furthering their academic studies after a master's by way of a PhD has only been available to students at research universities. Wittenborg University of Applied Sciences welcomed the idea when it was first proposed in a position paper by the Association for Dutch Universities (VSNU) and the Association of Universities of Applied Sciences (VH). The two organisations represent 14 universities and 36 universities of applied sciences. 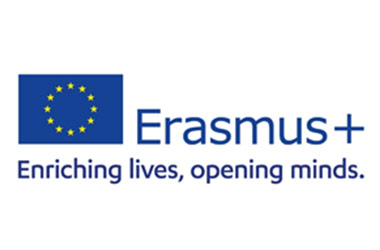 Wittenborg University of Applied Sciences is proud to be awarded the Erasmus Charter for Higher Education (ECHE) quality certificate for the period 2021-2027. The ECHE provides the “general quality framework for European and international cooperation activities a higher education institution may carry out within Erasmus+”. This award is a pre-requisite for all higher education institutions located in a programme country to participate in learning mobility of individuals and/or cooperation for innovation and good practices under Erasmus+. Wittenborg has achieved a score of 100/100 points in the re-awarding assessment and, therefore, successfully meets all the requirements to further engage in the programme. 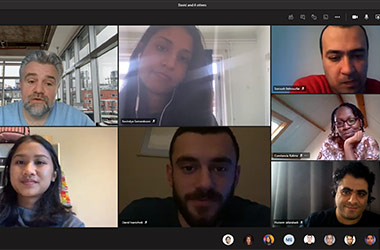 International students at Wittenborg University of Applied Sciences got some sage advice  from Dutch recruitment expert Olfertjan Niemeijer on how to impress potential employers when they apply for a job. This is the second time in six months Niemeijer, who has almost 30 years of experience in the recruitment business, shared his insight with Wittenborg students competing for internships and jobs in the pandemic economy.

The value of a good CV

Niemeijer emphasised two main points: Having a good CV (still very important when looking for a job), and learning the art of networking. He also urged job seekers to prepare themselves properly when they apply for a job or land an interview. "Every day we speak to people who apply for jobs, but they don't research the company or the person who is doing the interview. Some don't even know what the company they are applying for does. 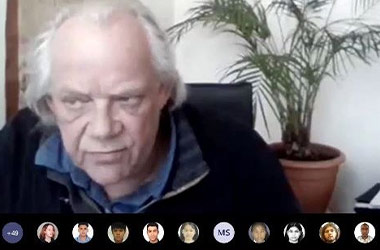 For their latest Project Week, students at Wittenborg University of Applied Sciences got to examine the skill of turning a problem into an opportunity and moving from risk to resilience through the lens of COVID-19. Students who write the most original essay on the questions posed to them will be awarded Junior Fellowship status in the 20/20 Vision Program and Network.

The programme is an international and transdisciplinary project stretching from 2020 - 2025 where participants collect and review lessons learned on strengthening the resilience of critical infrastructure before, during and after a crisis – such as COVID-19. The project is the brainchild of founder Prof. Eelco Dykstra, and Wittenborg senior lecturer Bert Meeuwsen is a senior fellow.

The idea is to link international business, the economy, with international emergency management. Dykstra explained in an earlier paper that the crucial role of the private sector in preparing for, responding to and recovering from any conflict or crisis remains underexposed and under-explored. "The prime reason for this lies in its complexity. In an increasingly global society many more and different actors (or sectors) need to be considered while they act amidst greater interdependence and increased vulnerability. 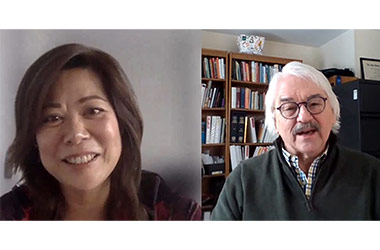 How to Make Your Students Love Online Lectures

Feeling frustrated about the limitations of online teaching? Dr Fred Mayo is here to tell you how to turn the whole thing into an adventure for your students. Mayo, a retired clinical professor in hospitality and tourism management at New York University (NYU), talked to Wittenborg CEO Maggie Feng about some techniques he applies to engage students better and make them excited about learning through a screen.

But first, a detour. Mayo said one of the subjects he taught at NYU was Research Methods – which he aptly calls "the course no one wants to teach". A fact many lecturers will testify to. "But I loved teaching and wrote a book about it, which came out of all the questions students were asking me in class. There aren’t many good books focusing on this area. I start by telling students they have been doing research all their life, they just did not realise it. This is very much like the way the Dutch think when they are confronted with a problem. They see it as an opportunity, not a negative." 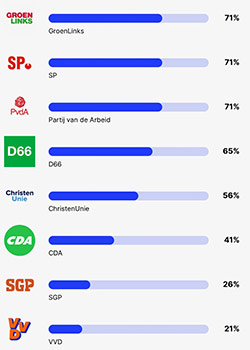 Finding a Balance in the Dutch Election 2021

By Peter Birdsall, President of Wittenborg University of Applied Sciences

This week will see the Netherlands' general election taking place, with voting spread over three days due to Covid and the result being known sometime Wednesday night. This time round, the election campaigns have been relatively 'mild' with debates held in the assumption that not much will change. That’s always a dangerous place to be in election terms, as apathy can be democracy's greatest enemy.

I can't vote in the Netherlands, which is actually my own choice. After living, working and running businesses in this country for over 30 years, getting a Dutch passport wouldn't be too difficult, however 'they' don't like double passport holders here, and I do like my British and Swiss ones!

Notwithstanding that, government and politics is immensely important for Wittenborg, as we are affected by changes in (higher) education policy, approaches to internationalisation, as well as immigration and social welfare policies to name but a few areas. For that reason, Wittenborg actively involves itself in discussions about higher education policy and development.

Another aspect to the electoral discussion is one of the 'coffee room' at Wittenborg. Many of my international colleagues (we have a lot at Wittenborg) have chosen to adopt their new fatherland and take Dutch citizenship and are therefore able to vote this year. Many of our graduates also stay to live and work in the Netherlands, and gain Dutch nationality. The discussions and my colleagues' views are interesting, as is the difficulty everyone seemingly has to 'work out' who to vote for in an increasingly disparate electoral landscape with 37 'parties' to choose from. 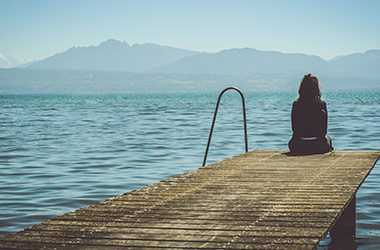 A survey among international students in the Netherlands has shown that the majority have often experienced anxiety, loneliness or boredom the past few months. The survey was carried out by Nuffic, the Dutch organisation for internationalisation in education, to glean insight into the general well-being of international students as they continue to weather the impact of COVID-19 on their studies.

Last week, at Wittenborg University of Applied Sciences' annual Students and Staff Conference, mental health was also cited as a huge concern for students. Subsequently, in their report they have asked the institution's management to prioritise support in this area. Wittenborg's Director of Corporate Governance, Karen Penninga, said this is something management would look into. "We will definitely look into how we can help to provide better mental health care support," she told attendees.

Dutch Government Optimistic about Vaccination for All Adults by Summer 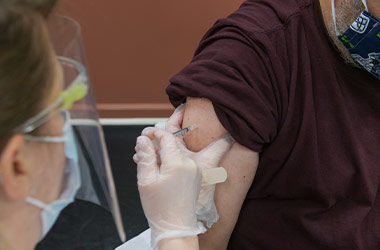 Everyone in the Netherlands to Get First Corona Jab by 1 July, Including Students

Everyone in the Netherlands who wants to be vaccinated will get their first shot by  at least 1 July, according to the Dutch government's calculations. This includes international students who are currently residing in the country. The announcement was made by the Dutch health minister, Hugo de Jonge, earlier this week. Provided the vaccines are delivered on schedule, De Jonge added.

So far, over 1.6 million people have been vaccinated in the Netherlands, with the vaccinated rate to speed up in the second quarter of the year as production from the various suppliers is scaled up and more vaccinations enter the market. This week the government announced that it was expecting to up-scale its vaccinations to reach 1.5 million per week by mid-May.

Of the 17 million people in the Netherlands, of which 14 million are adults, surveys indicate that about 12 million in that group want to have the vaccine. The government estimates that it will have administered about 18 million shots by the end of June. Some vaccines like BioNTech/Pfizer need to be injected twice.

International students resident in the Netherlands will included in the vaccination programme, also if they have just arrived to start their studies. By July no waiting lists will be expected anymore.