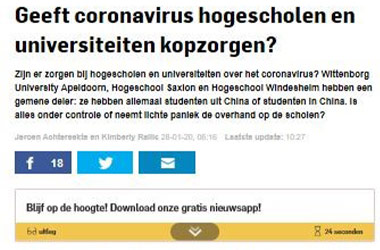 Two Wittenborg Students in Wuhan to Stay in China for Now

Wittenborg University of Applied Sciences has sent out an email to all its Chinese students to get an accurate idea of their current situation in relation to the new coronavirus - including two students who recently travelled to Wuhan, the city where the virus originated, Wittenborg's chair of the executive board, Peter Birdsall, told the Dutch press.

Universities and schools around the world are trying to make plans in the face of new or returning Chinese students. The next round of new students at Wittenborg will start classes in two weeks, on 10 February. Dutch daily, De Stentor, interviewed representatives at several institutions of higher education in the Apeldoorn region with Chinese students or students studying in China.

Birdsall told the paper Wittenborg has about 100 Chinese students, which represent 10% of its total student population. He said the two students who are in Wuhan will not be returning to school for now. We have been in contact with them and they are well. "They are with family members and in good health."

He said he understands their choice to travel home despite the risks. "They wanted to be with their families (for the Chinese New Year)." It is unclear when they will return. Meanwhile, the university is doing everything in its power to make sure they can continue with their studies. "One of the students will be graduating soon and luckily a lot can be done online. We try to find a resolution for all issues - for instance, these students are exempted from our compulsory class attendance."

Birdsall has advised students in China to register themselves at the Dutch embassy in China to stay in the loop about travel advice, evacuations and other information.

According to him no one is panicking yet. "We did get two emails from concerned parents - one was from a Brazilian student and the other from an English student. We advise them to trust the Dutch government. We also discourage things like wearing surgical masks." In May the school is planning its annual trip to Shanghai as part of a Project Week. It is unclear whether it will go ahead.