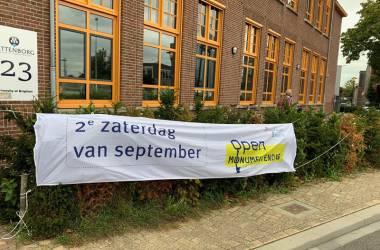 Open Monuments Day Apeldoorn themed: 'Learning Monument' was held on 12 and 13 September, 2020. Each year, thousands of monuments open their doors to the public on Heritage Day. With approximately one million visitors in attendance, the BankGiro Loterij Open Monuments Day, a component of the European Heritage Days, is one of the biggest cultural events in the Netherlands and a platform to connect the populace with the country’s cultural heritage. On Open Monuments Day, local monuments are open to the public free of charge, generating public interest and increasing awareness and support for preservation. Many activities ranging from exhibitions to treasure hunts are organised to appeal to people of all ages.

A total of 31 educational institutions in Apeldoorn were open to the public over the weekend, including Wittenborg University of Applied Sciences’ campus on Spoorstraat. The building has a rich history from its conception back in 1920, designed by architect Janssen Schrakamp from Hengelo. In 1965, it was occupied by the Roman Catholic boys' school Saint Gerardus Majella. 50 years later, Wittenborg took over the building for its second campus location after being in Apeldoorn for 5 years.

Small groups of visitors were greeted by Wittenborg CEO Maggie Feng and 2 volunteers from the organising committee. A short video played at the entrance summarising the building history, renovations, and current state, followed by an in-depth tour. Feng led each group through the hallways explaining in detail reasons behind the lighting selection, pointing out changes made to the staircase down to the unique, sustainable carpeting.

One of the visitors, Frans Hessels, attended Saint Gerardus Majella from the age of six until he was twelve years old. Being able to visit the building during Open Monuments Day was “most important”, Hessels stated, reminiscing about the school bell ringing to signal the start of lessons and how he witnessed the devastating fire sparked in the adjacent factory building in 1958. After the tour, Hessels commented on the vast changes made to the school since leaving and expressed how pleased he is that the building still stands. A total of 78 visitors walked through the campus on Saturday to participate in Open Monuments Day Apeldoorn.