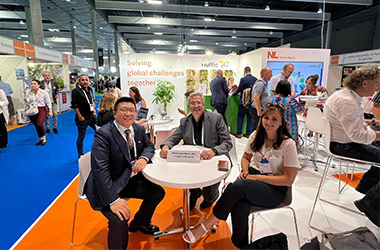 Between 13 and 16 September, Wittenborg participated in the 32nd European Association for International Education (EAIE) Conference, which this year took place in Barcelona, Spain. The school was represented by its president Peter Birdsall and Accreditation and Assurance of Learning Manager Kriszta Kaspers-Rostás, in what was the first in-person EAIE event to take place since the onset of the COVID-19 pandemic.

Held with the theme ‘The future in full colour' – which focused on the embracing of the ever-expanding spectrum of tools for internationalisation – the conference was attended by over 6,500 people from all parts of the world. Noticeable absences were China, in view of its ongoing closure, and Russia due to the war in Ukraine – but Ukraine itself was represented.

EAIE’s programme featured multiple kinds of activities including panels, networking events, workshops, paper and poster presentations. Prior to travelling to Barcelona, Birdsall had pre-recorded an online session, together with Dr Robert Buttery, head of the International Office at the University of Applied Sciences Arts Northwestern Switzerland. The event had been hosted by Marine Condette – Manager of Accreditation and Member Services at the Association to Advance Collegiate Schools of Business (AACSB) – with the title ‘How to mix all the colours on your palette: diversity and inclusiveness in higher education’ (learn more).

On 14 September, Birdsall was involved in the presentation of a live session together with colleagues from Finland, Czech Republic and the United Kingdom. This activity was held in the format of a world café, where 120 participants sat around tables and debated three areas related to diversity, inclusion and equity. Among other events, Wittenborg’s representatives also attended the AACSB session on business education, which addressed the development of partnerships during and after the pandemic. 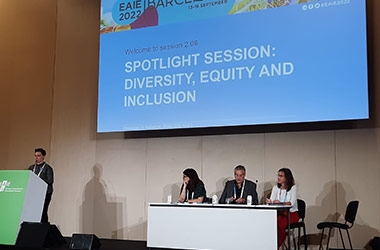 In addition to that, Wittenborg was part of the NUFFIC ‘Study in NL’ stand together with six other Dutch education institutions. Apart from helping to promote the new branding of the initiative previously known as ‘Study in Holland’, the school held meetings with prospective partners for mutual exchange programmes, Erasmus+ research projects and also a number of agents who visited the conference.

According to Birdsall, one of the most important aspects of attending EAIE is the maintenance of current contacts and partnerships within the education areas where Wittenborg operates, by meeting representatives of other business schools and sharing experiences and best practices with them. “The discussion on diversity, inclusion and internationalisation in higher education is a continuing development at Wittenborg, but also all higher education institutions across Europe and the world. Having the opportunity to meet people who understand this and think likewise in person is an extremely valuable experience. I personally learned many new approaches and ideas about how to develop diversity and inclusion policies in the context of higher education institutions.” 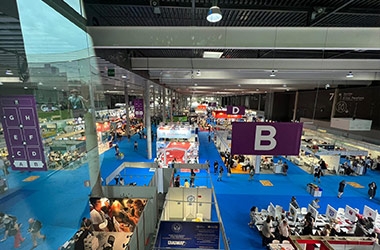 The president of Wittenborg highlighted that the 32nd EAIE conference was the biggest until now with regard to attendance, probably because of the two-year gap due to the COVID-19 pandemic. “For us, it was extremely successful in that we were able to re-establish personal contact with many of the partners we had not seen for a number of years. The next EAIE will be held in Rotterdam, and Wittenborg aims to have an even bigger presence at that conference.”

In Kaspers-Rostás’ view, the experience of attending the conference was extremely positive, and she adds that the sessions delivered by higher education professionals gave her the opportunity to learn a lot and hear about the latest developments in the sector. “It was wonderful to experience this vibrant community of professionals; I got to enhance my networking skills and I even made new friends during the conference. In my opinion, it is remarkable that diversity, equity and inclusion are so highly regarded and considered essential topics nowadays. I feel that every bit of contribution fosters the progress of humanity and helps improve our student and staff communities,” she stressed.