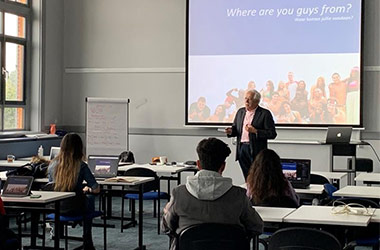 Increased cultural diversity in companies calls for the ability to work productively with people from different backgrounds – which is why business students at Wittenborg University of Applied Sciences recently got a masterclass from Dutch conflict resolution expert Prof. Adrian Borggreve who has decades of experience under his belt – which includes training the Lithuanian parliament in negotiation skills.

Borggreve delivered a guest lecture earlier this month under the theme: "Disputes and Conflicts in a Cross-Cultural Business Context", part of the Intercultural Management module for undergraduates. It was well-received by Wittenborg's diverse body of international students who recognised many of the challenges they sometimes face in an intercultural setting and the lessons they have learned.

Borggreve stressed the importance of cultural intelligence for effective negotiation in a business setting. "Why? Because managers cannot expect to negotiate only with people of their own country or culture throughout their career. Negotiations between people of different cultures often stir up deeply held values and beliefs. Behaviours that seem normative in our culture often create controversy in others."

He cautioned students about being sensitive to what other cultures deem appropriate or not appropriate behaviour and what they value. "Be prepared to manage bureaucratic interactions with governments, avoid arguing the inherent legitimacy of a social system, understand the norms and the meaning underlying them," Borggreve explained.

"Some cultures are achievement orientated, so you have to respect the need of the other party to look strong, competent and experienced. Use professional titles and qualifications to underline your competence and personal achievements. In status-orientated cultures have senior members with formal roles in your team – so no young, assertive, aggressive men and women who spout knowledge like ammunition and expect others to surrender. It is perceived as an insult. Respect hierarchy, do not undermine the credibility of senior members and a preference only to do business face-to-face."

Borggreve told students there are also some positive sides of conflicts and getting to resolve them: "It develops clarification on an issue, increases productivity and initiates growth and strengthens relationships when the issue is creatively resolved."

Borggreve also elaborated on the different negotiation styles, listing a forceful approach – like the Americans during the Vietnam War – as a lost opportunity. "Before going to a country, you have to know what is important to them and who is the best person to negotiate with to achieve your goal. "When you focus on forcing and controlling – playing a hard game, threatening and digging in on your position –  then it's over."

Instead, he advises seeing things from the other person's perspective, balancing emotion with reason, consulting before deciding and separating the people from the issue.