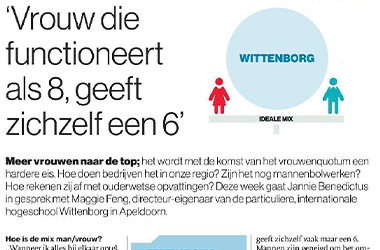 Women who underestimate their achievements and often score themselves lower than what they actually deserve was one of the topics raised by Wittenborg CEO Maggie Feng in a recent interview with Dutch regional newspaper De Stentor. The article was part of a series of how Dutch companies are faring in terms of female representivity at the top in light of a quota for women considered by the Dutch government.

"A woman functioning as an 8 will often score herself a 6. Men on the other hand, do the opposite. As director it is good to have these sort of insights," Feng said. To make its own contribution to bringing more women in fields where they are a scarcity, Wittenborg intends on giving a fee reduction of €5,000 for girls wishing to follow its MBA in Data Analytics. Technology is still one of the industries that sorely lacks females.

So how is Wittenborg doing in terms of gender equality? Of its three directors, two are female – Feng and Wittenborg's Director of Corporate Governance, Karen Penninga. Peter Birdsall is the President and Chair of the Executive Board. Directly under them is a management team consisting of 6 women and 6 men. The Academic Advisory Panel is also gender balanced with 5 men and 5 women.

Of the 245 people who worked at Wittenborg in 2019, 41% are female and 59% are male. "This is mainly due to the fact that at the top of some academic disciplines there are more men than women. And obviously we want the best lecturers."

"I often talk to our female employees who are struggling to combine their family and a career. I want to make them see that they should be proud of themselves, that there is a lot they can achieve and that they should use their talent."

Wittenborg's student body in 2019 was balanced at   is currently busy defining and strengthening its diversity policy in order to guarantee inclusivity at the organisation.